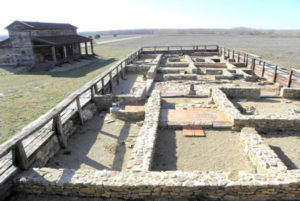 This route passes through the beautiful and fertile district of Los Valles, which, alongside its green fields, hides first class archaeological heritage, with centres and sites spread throughout the Carpurias mountain range.

Granucillo de Vidriales: Megalithic tombs in Las Peñezuelas and San Adrián and the ruins of the castle owned by the Counts of Benavente.

Santa Marta de Tera: A pretty 12th-century Romanesque church with interesting iconography that includes embossed figures, the most famous of which is that of Saint James the Apostle.

Benavente: This past and present strategic point and crossroads marks the end of The Silver Way in Zamora and provides the visitor with a range of emblematic monuments, such as the Torre del Caracol tower, part of the Pimentel family’s magnificent palace-castle, and the Romanesque churches of San Juan del Mercado and Santa María del Azogue, from the 12th and 13th centuries. The valleys’ fields have made the region’s red peppers famous, while the medium-alcohol light red ‘clarete’ wine of the lowlands has been awarded D.O. status. Bullfighting is also important here, in an event known as ‘Toro Enmaromado’ (in which a bull is released onto the town’s streets guided by a rope).