The fields become green again and for another year the promise of fertile land spreads over the province of Zamora.

Sunlight bathes the earth to celebrate the end of the cold weather. The town and city dwellers unhesitatingly go into the countryside to ask for favourable weather. In the past it was the gods who received this request, but today it is the patron saints of regions and villages.

There are still many Zamoran towns that practice the tradition of the Mayo, when on the first day of May young people cut down a communal tree, or Mayo, and place it vertically in the village square. The celebration is of pagan origin, linked to the fertility of the earth. The tradition is also linked to agriculture.

The Procession of Light, as Zamoran as it is Portuguese, is celebrated on the Sunday after San Marcos at the chapel located on the hill by that name, in the region of Moveros, on the border with Portugal. The Alistanos bring their Virgin there and enjoy the popular procession, with numerous stalls of products that are as Spanish as they are Portuguese.

This festival is celebrated on the day after San Marcos. Near the shrine of Nuestra Señora de Gracia, in the region of Villamor de Cadozos, villagers from Bermillo, Villamor de Cadozos and Almeida gather for different reasons: yesterday, it was to ask for rain, today it is to spend a day in the country.

Another popular procession is the Procession of Christ in Morales del Vino. It takes place on May 9, but actually begins the evening before when Zamorans and villagers from la Tierra del Vino are received to eat traditional hazelnuts and doughnuts. 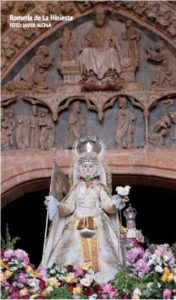 On Pentecost Monday the people of the city of Zamora bring their patron saint, the Virgin de la Concha, in a procession from the church of San Antolín to the town of La Hiniesta to meet with the Virgin of the village. The mayors of both towns exchange canes. It commemorates that, according to lore, King Sancho IV encountered an image of the Virgin in this place.

On Pentecost Monday on the outskirts of Toro, the procession of the Cristo de las Batallas (Christ of the Battles) is celebrated. Members of the brotherhood meet at the temple located along the Duero River to celebrate religious ceremonies and share a convivial meal in the open air.

Festival declared a Regional Tourist Interest. Fariza is the focus of an astounding concentration during the month of June. They are Viriatos, enormous, seven-meter tall banners that need four people to carry them. Every one of the parishes that surrounds Fariza attends with its banner to begin the procession to the shrine of Nuestra Señora del Castillo.

This is a festival that was declared a Regional Tourist Interest and takes place in Benavente, celebrated in honour of the Virgin of the Vega eight days after Resurrection Sunday. During this celebration, the people ask the mayor for the “toro enmaromado,” which is then granted and celebrated fifty days later.