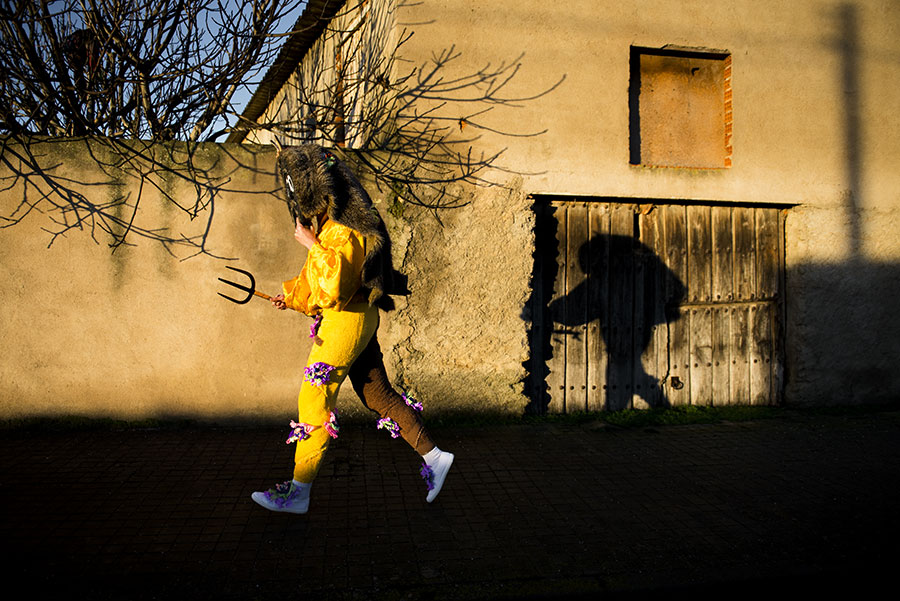 The winter masquerades constitute one of those rare and fortunate examples of cultural survival that still occur on our Iberian peninsula. Some of those places are concentrated in the province of Zamora, where in December and January a series of festive traditions with ancient origins and symbolism take place. All coincide with the winter solstice and sometimes continue until the Antruejo celebrations in the carnivals. Extravagantly dressed people star in the celebrations of different Zamoran villages.

The identifying characteristic of these celebrations, related to others taking place nearby in Portugal and Galicia, is the fundamental presence of devils who run and jump through the village streets, teasing the people or inviting them to join in. They tend to be young people who use these characters to organize festivities and ask for Christmas money, using instruments like cowbells, tongs, blown-up bladders, etc. that they use to chase after, hit and generally try to frighten the people.

The village’s young people star in the celebration of the “Visparra” on December 25 with the “Talanqueira” or big cow as the main character. This outlandish character, accompanied by several others, runs from house to house asking for money.

Declared a Regional Tourist Interest this is one of the most popular characters on the calendar of festivals and rites of Zamora. Dressed in colourful garb with a leather mask and a headdress of coloured ribbon, on December 26 “el Zangarrón” chases neighbours in search of money.

On December 26, the “Entrantes” awaken the musicians, “al Tafarrón,” and “la Madama,” to go from house to house to greet people “in the name of Baby Jesus.” During Mass that day “la Madama” offers the saint to the last child born in the village.

Montamarta receives a visit from “el Zangarrón” on January 1 and 6. Two young people are chosen from among the 18-year olds for the role of the Zangarrón, one on New Year’s Day and the other on Three Kings Day. Some traditional elements of this festival are cowbells, Christmas money, the blessing of bread and receiving consent from authorities.

On December 26, the visitor becomes spectator of a dramatic sequence carried out by villagers. There are four roles: “los Guapos” (the Handsome), “el Galán” (the Gentleman), “la Madama”, a boy dressed as a woman), “los Feos” (the Ugly), “la Filandorra” and the Devil).

After Mass on December 26, el Caballico, an emblematic figure, runs after the crowd with a long tail soaked with water, mud and worse that he uses to “paint” anyone within reach. Another typical character is “el Pajarico” whose task is to ask for Christmas money.

Declared a Regional Tourist Interest in which eleven people take to the streets on January 1:

Carocho Grande,” “el Carocho Chiquito,” “el Galán,” “la Madama,” “el del Tamboril,” “el del Cerrón,” “el del Lino,” “el Molacillo,” “el Gitano,” “la Filandorra” and “el Ciego.” The drama develops as if it were a street performance. The appearance of “los Carochos,” in a puff of smoke and yelling is as spectacular as their costumes.

“El Atenazador” (The Pincher) of San Vicente de la Cabeza is a demonic masquerade. The devil is represented by the Atenazadores who carry tongs and cowbells and wear masks. The other character is “la Filandorra,” an older woman who chases people and throws ash. There are also a couple on their wedding day, a pair of bag-pipers and a group of beggars. This masquerade takes place every August 11, on the day of the village’s saint’s day.

Here, on January 1 the Devils are the stars, dressed in black and armed with cork masks, tongs, cowbells and sticks. Twelve people in all participate in the celebration, including “la Filandorra,” “Rullón,” “el Ciego,” “el Molacillo,” “la Madama” and “el Galán,” plus two “Pobres del Saco.”

El Cencerrón and la Filandorra, ringing cowbells hung on their belts, are the top participants in this celebration. The rest of the characters appear later to fight and throw ashes.

Since the Church prohibited “Zangarrones” and “Obisparras”, this celebration has been moved to Fat Sunday, Monday and Tuesday of Carnival so that the Devils and Cencerrones can mingle with typical Carnival characters.

The Vaca Bayona survives today in only Almeida de Sayago. It takes place on Fat Sunday and Tuesday of Carnival. It is depicted by a young man in a wooden frame with horns on one end and covered with a blanket. The mask represents the head of a cow.

The Assumption of the Virgin is celebrated on August 15. This Obisparra includes 16 characters that are also from the traditional Filandorra: el Niño (the Child), el Ciego (the Blind Man), el Soldado (the soldier), el Mendigo (the Beggar), Bailador y Bailadora (the Dancing Couple), el Afilador (the Knife Sharpener), and el Piojoso (Louse Head), several sowers and their bulls (los carachos), as well as el Arador (Plower) y el Gañán (Farmhand).

The festival calendar of Zamora has a new landmark on February 2 with the celebration of the Candelas in different parts of the province, such as Samir de los Caños, Moraleja del Vino, San Esteban del Molar, Villalba de la Lampreana and el Pego. It has this name because during the festival all the candles that will be used during the entire year are blessed. During the festival, the women “run the bread” from house to house, inviting people to join in the dance.

In Castilla y León traditional Carnivals have little history. The city of Toro, as popular participation shows, is one of the lucky few in the region’s Carnival calendar for its enthusiasm for disguise and the impressive procession that fills the streets and plazas with colour during Carnival. This is a festival that fills the streets of Toro and over the decades has reached the official level of Festival of Regional Tourist Interest. A children’s parade takes place on the Monday of Carnival and the next day, on Mardigras, the main parade is celebrated.