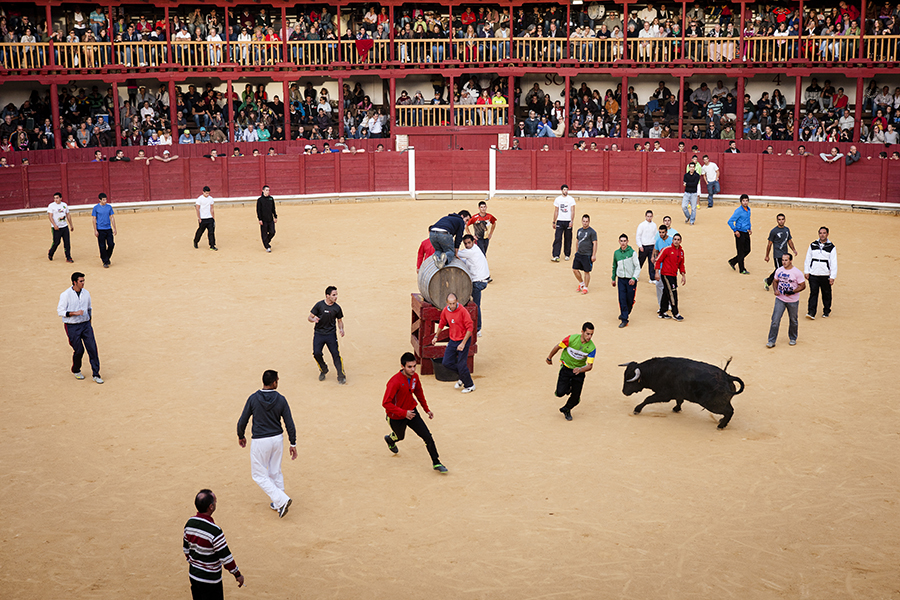 With the heat of summer also come patron saint celebrations in which the bull makes an appearance.

Benavente is known for the festival of the Toro Enmaromado, declared a Festival of Regional Tourist Interest. It takes place on the eve of Corpus Christi. The animal runs through the streets with a rope tied to it, 200 meters long and weighing 1000 kilograms. The “peñas” have an important role during the bull run as well as through the night.

The festivals and celebrations of San Pedro are celebrated around the 29th of June and range from modern culture and rock music to children’s programs. Among the festivities, highlights are the Garlic Fair and the Ceramics Fair, the oldest in Spain, attracting numerous vendors of popular pottery by potters from Pereruela, Moveros and Toro as well as from the rest of the country. Livestock fairs and local products thrive alongside jazz, flamenco, folk festivals and conferences. 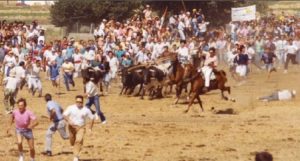 Since the 19th century, during the festivals of La Visitación, the capital of Guareña celebrates its traditional Espantes, where a group of bulls is enclosed in the meadow for a group of young riders to guide into the city centre. There, they meet with a human barrier that tries to make them take flight. This bull festival, unique to Fuentesaúco and neighbouring Guarrate, is celebrated in early July. Bull runs, bullfights and contests of acrobatics complete the program.

In late August, with the festival of San Agustín, the inhabitants of Fermoselle surround the main square with wooden planks to form a makeshift bull ring, which has now become a point of reference for fans. The bulls arrive in a spectacular bull run and once inside the plaza the festivities continue.

Bull runs take place on the 16th of August in and around San Roque. In addition to bull runs in the country (by riders on horseback, ATVs, motorcycles or tractors), afternoon bullfights in the Plaza Mayor have brought fame to the region, as have the “toros de alba” that attract large crowds of people.

The town of Toro lives up to its name during the festival of San Agustín, held on 28 August. Besides regular running of bulls, the bullring town hosts the celebration of the famous “Wine´s Fountain”, a bullfighting where a great Toro wine cube is at the center of the arena. The young boys drink from it while bulls and heifers run around. The popular carriages, which make all the village craft during the year for the parade of St. Agustín, are another attraction of the festival. 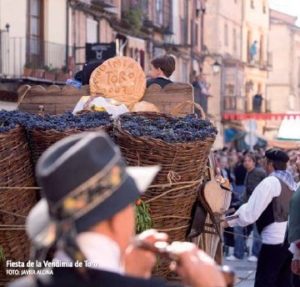 The Fiesta de la Vendimia takes place during the first half of October and serves to turn the harvest into an excuse for a celebration that mobilizes the people.

In Toro, the deep-rootedness of this tradition has caused it to be declared a Festival of Regional Tourist Interest. The festival has all the necessary elements: the reading of the proclamation, the parade of decorated carriages and baskets of grape harvest.

The grape harvest festival celebration has extended to other wine-making regions, such as Arribes, becoming a classic of this season.

The protagonist of the festival of Las Victorias is the “Toro de Fuego,” converting the Sanabrian capital into a major tourist attraction every September 8. This bull attraction dates back to the mid-19th century, when a large bull was constructed that spat sparks and went through the streets in search of victims. Other unique features of the festival of Las Victorias are the Giants and “Cabezudos.”