Sayago, and possibly one part of Aliste, is one of the best-preserved open-air ethnology museums of the Iberian Peninsula. Its architecture remains intact in a setting of curtains, crankshafts, water wells, pontoons that jump streams, “chiviteras”, the thatched huts and crowded villages attest to a culture harmonized with a countryside of granite, oak, heather and “escobales.” Criss-crossed with old Roman roads that keep the eyes of the stone bridges mute but not blind. It is said that Viriato, the brave Lusitanian shepherd who confronted an entire Empire, lived in this place. There are some who even mark his birthplace in a Sayaguesan village, specifically in Torrefrades.

Bordering with Aliste, Portugal and Tierra del Vino, the region of Sayago is nestled between the Tormes and Duero rivers. Its popular architecture is of exceptional interest and its Nature Park, the Arribes, offers one of the most stunning landscapes in the peninsula. With all this, it is no wonder that Sayago is a favourite tourist destination, described as “an open-air ethnology museum.” 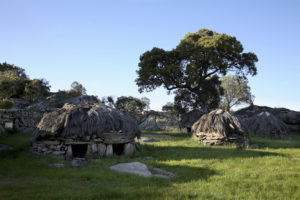 Villages like Villardiegua de la Ribera, with its well-known “mare”, a pre-Roman bull from the Second Iron Age, Sogo with its unique Roman bridge and Almeida, preserve archaeological remains from the Romanization of this area, which is interconnected by ancient roads like the Mirandesa. The appearance of the Puente Pino,a spectacular bridge over the Duero River with its iron construction and great arch of light, is surprising in this rugged countryside. Torregamones is another attractive town in the area with its “chiviteras.”

Pereruela is an important provincial pottery centre, going back to ancient times and continuing to our days. Its clay tools and ovens are known for their high resistance to flame and for their excellence use for cooking.

The historic village of Fermoselle, known as the Balcony of the Duero, has been declared  Historic-Artistic Complex. The Romanesque church Nuestra Señora de la Asunción stands out, as does the historic convent of San Francisco, founded in 1730, and whose 12th century church was restored in the 18th century. In addition to the charm of the town, which was the last redoubt of Bishop Acuña during the Revolt of the Comuneros, the district has truly spectacular places.

The historical heritage of this region is founded on its commitment to rural tourism, and offers a wide range of choices for the most discerning traveller.