The church of La Hiniesta shows the portico of Santa María la Real, one of the most beautiful examples of the Zamoran Gothic style. The southern atrium and facade, dating from the time of the “Catholic Kings” are striking for their beauty. The interior of the portico is covered by a ribbed vault supported by plain corbels. Inside, there are three stone images– of the Virgin with child, of Saint Gabriel, the archangel and of the Virgin with baby Jesus in her arms.

Along national road (N-630) near San Cebrián de Castro are the ruins of the Castrotorafe fortress, built at the foot of the Esla River in the 11th century. In the 15th century, Castrotorafe was comparable in importance to cities like Zamora, Benavente and Toro. Stretches of wall constructed with slate masonry and mortar still exist, indicating the solidness of a border fortress in those times. Castrotorafe was destroyed and re-populated several times until it was finally abandoned in the 18th century. It was declared a “Property of Cultural Interest” in 1931, while the castle has been a “Property of Cultural Interest” since 1949.

On the banks of the river Valderaduey, the parish church of Molacillos is a unique example of Levantino Baroque style in Zamora. 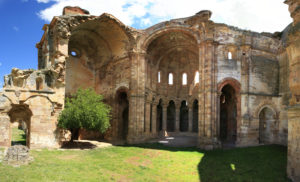 One of the most beautiful and magnificent Cistercian monasteries in the province of Zamora is the Monastery of Moreruela in the municipality of Granja de Moreruela. The monastery retains the bearing of the imposing Cistercian abbey constructed by order of King Alfonso VII. Constructed at the end of the 12th century, it is Romanesque in style with elements of Gothic transition. The head is the most grandiose part of the church, formed by superimposed levels with small apses, a polygonal ambulatory and the central apse. The monastery has undergone one of the province’s most extensive restorations in recent years.

The great historic richness of the Villalpando is evident in various monuments, including the remains of imposing walls and fortifications, preserving two of the monumental gates: Saint Andrew’s (known as Puerta de la Villa) and Saint James’s, as well as the Castle of the Velasco.