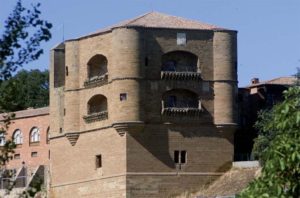 Known for its strategic location, Benavente is the second most important Zamoran city. It is a communication hub with the northeast of the peninsula and the capital of the beautiful and fertile “de los Valles” region, which possesses boundless archaeological heritage. If the Roman road of la Via de la Plata, which runs along the southern Way of Saint James is an established road, the archaeological digs and sites of the area that are scattered on the Sierra de Carpurias are no less so.

The city of Benavente became prominent in the year 1398, when it passed into the hands of the Pimentels, making way for the noble descendency of the Counts of Benavente, continuing until the end of the 19th century.

Standing out are the Hospital de la Piedad, founded in 1518 in the Renaissance style to lodge pilgrims, and the Casa de Cervato, built in 1881, one of the best-preserved houses of the local bourgeoisie, which today houses the departments of the local Town Hall.

The current Parador de Turismo (historic luxury hotel) includes in its construction the 16th century Torre del Caracol, which was part of the magnificent palace-castle of the Pimentel. 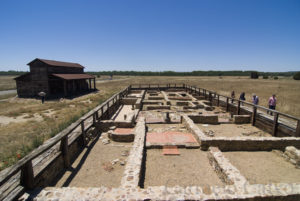 The Archaeological Route through the Valleys of Vidriales, Órbigo and Eria offers a wide range of archaeology, from the Neolithic and early Iron Age to the end of the Roman Empire. In Morales del Rey and Granucillo de Vidriales, the dolmens of El Tesoro, Las Peñezuelas and San Adrián may be seen. Located in Arrabalde are the dolmens known as El Casetón de los Moros and an education room where the way of life of this pre-Roman people is explained. Manganeses de la Polvorosa recreates the life of another village that was inhabited until the Roman era. Rosinos de Vidriales is the village that housed the Legio X Gemina Roman Camp and the Ala II Flavia which have been recreated and the small town of Santibañez de Vidriales exhibit the Interpretation Centre of the Roman Camps.

The church of Santa Marta de Tera, built in the early 12th century, shows two figures, including James the Apostle in high relief on the south facade. Twice each year, on March 21 and September 22, the temple is the setting for the miracle of the equinox light, when for a few moments the light illuminates a capital carved with Biblical motifs.