Within this natural setting, a visit to Santa Cruz de los Cuérragos, a small village that retains interesting examples of traditional architecture, is worthwhile. Its buildings are similar to those of Robledo and Ungilde, with slate a dominant architectural feature. The regional government of Castilla y León has declared it a “Property of Cultural Interest” (Bien de Interés Cultural), as an Ethnological Complex. Riomanzanas is another village in the region with a variety of undeniable and attractive architecture. 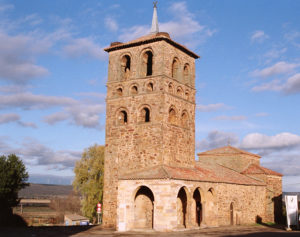 Tábara, birthplace of León Felipe, holds the Romanesque church of Santa María, whose monastery preserved the illuminated codex called “del Beato Tavariense,” currently in the National Historical Archives. There are numerous examples throughout this region of traditional structures, such as corrals, that were formerly used to keep livestock and that represent one of the most beautiful rural scenes of the Aliste region. Also worth remembering are cortinas, sunken stones that mark property lines, and watermills.

The church of San Pedro de la Nave was constructed between 680 and 711, making it one of the latest works of Visigothic Art. It was originally located on the banks of the Esla River, but it was moved to its current location at El Campillo in the 1930s.

It first appeared as a Greek cross; however later two lateral naves were built that gave it its final appearance, a cross between a basilica and cruciform floor plan. The elaborate capitals of “Daniel in the Lions’ Den” and “The Sacrifice of Isaac” are notable.

Alcañices is the capital of Aliste. In 1297, Ferdinand IV of Castilla and Dionisio I of Portugal signed the Treaty of Alcañices in the city, establishing the border between Spain and Portugal. Four turrets remain of the ancient wall, the most famous being the Torre del Reloj (The Clock Tower). It also has two churches.one that dates from the 16th century and belongs to the Convent of San Francisco, the other, sober and simple, dates from the 13th century. Next to it is the old palace of the Marquis and Marchioness of Alcañices.

A tour of this region takes us through soft, rolling countryside with remarkable places like Carbajales de Alba, birthplace of the carbajalino dress, whose embroidery dates from the 16th century. Moveros, is an important centre for the making of pottery, casks, drinking jugs, casserole, and its most unique piece, a pitcher with one or two handles with a narrow mouth and wide neck.